Share
Share on Facebook Share on Twitter Pinterest Email
Calla Tor has always known her destiny: After graduating from the Mountain School, she’ll be the mate of sexy alpha wolf Ren Laroche and fight with him, side by side, ruling their pack and guarding sacred sites for the Keepers. But when she violates her masters’ laws by saving a beautiful human boy out for a hike, Calla begins to question her fate, her existence, and the very essence of the world she has known. By following her heart, she might lose everything – including her own life. Is forbidden love worth the ultimate sacrifice?
-Goodreads Synopsis 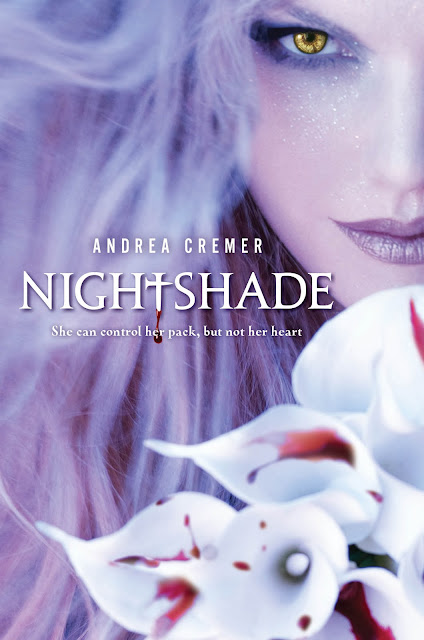 I’ve read a few vampire novels, and of course my natural progression was to find a werewolf book, and then voila, I found Nightshade. At first, I was under the belief that it would purely be a werewolf novel, no other paranormals in sight.  I was wrong, but that wasn’t a problem. It made for a more interesting novel.

First thing’s first, I’d ought to explain the heirachy and the two different factions of witches. I would have appreciated it if Cremer had made this obvious from the beginning. The werewolves in this novel are known as Guardians, and they serve the Keepers, one of the factions of witches. In return, the Keepers pay for their education and living costs, and the Guardians view it as an honour to serve. So what do they guard? Secret sites of great importance.
wolves vs wolves:
There are two opposing packs in this novel, the Nightshades and the Banes. They pretty much hate each other, and I guess it has something to do with them being two different packs living near each other with their own different Alpha males.
Keepers vs Searchers

Now, what really gets to me is how we are told that the ‘Searchers’ are the bad guys, but we don’t know why. It’s just what we’re told, and for some reason our MC, Calla, is trained to kill them. I suppose on some level it makes sense as this is all Calla knows. She’s been brought up never to question her masters, the Keepers, of which Lumine Nightshade is her main mistress. The packs are named after their head Keeper, thus the Banes are named after Efron Bane, and the Nightshades after Lumine Nightshade. I wish this had been explained earlier.

It is also never really explained why the Searchers and the Keepers hate each other, except for the fact that the Keepers pretty much behave like iron-fisted dictators. Not to mention that they hunt the Searchers to kill. Well, not personally of course. That’s what the Guardians (the werewolves) are there for. By now you are probably wondering what the Keepers and Searchers actually are. At the beginning of the novel, Calla’s ‘school mates’ are divided into three major categories: Guardians, Keepers and humans. This hints that the Keepers are not human, unfortunately it takes forever for Calla to actually spell it out to the reader that they are WITCHES! Would telling us this nearer to the beginning of the book have been so painful? Just wondering.

But why would a werewolf have a master? Surely it goes against the instincts of an alpha to take orders. This was mentioned in another blog I read, and if I’m honest, I hadn’t thought about it too much up until then. I’ve come to realise that if I question things too much in a YA book, I won’t enjoy myself as much because I’ll be too absorbed in the impossibility of such a situation. So naturally, when I was told that Guardians had to be submissive to their masters, I was like ‘OK’. Now I’m thinking ‘Why didn’t Ren totally bite Efron Bane’s head off?’, considering the way he treats Sabine.

If you’ve read the synopsis, you should have gathered that the main love interest is a human boy, and that this is a novel with a love triangle. The other guy in this triangle is none other than alpha male Ren Laroche of the Bane pack. So whose team am I on? That is never an easy question…
The problem I have with the human boy Shay is that he’s really nice and I love the mystery that surrounds him as the novel progresses, but I don’t get what is so great about him. The only thing appealing about him besides the fact that he obviously isn’t like a normal human, is that Calla is obviously forbidden to be with him. Now I’m a bit of sucker for forbidden love, as it just makes the plot more interesting, but really, when the whole novel seems to revolve around this, it can be a problem. So above all:
Do NOT read this book if you hate LOVE TRIANGLES!
So what do I think of Ren? Well, there is something appealing about him, in that whole bad boy way. What really gets to me is the fact that he actually seems to care about Calla. I mean, it isn’t that obvious as one could take the way he behaves as simply being possessive. After all, he would have to lose some bad-boy ‘street creds’ for revealing his undying love for Calla. There is something there between them- a spark if you will.
The love triangle reminded me of Irial, Niall, and Leslie from Melissa Marr’s Ink Exchange. Not the whole thing, mind you, just a particular scene. At one point in Nightshade, Calla dances with Shay and Ren goes all alpha male on the whole situation. Similarly, Niall brings Leslie to a party and Irial ends up dancing with Leslie, possessively claiming her. OMG! I do not believe I just compared Irial to another character. He’s way too unique.
Besides the romance going on between the MCs, there are also other characters here with love lives. Now the issue with this is that besides the alphas, every other Guardian has to get permission to marry from their Keeper as well. So if said Keeper does not approve, unfortunately the union is forbidden. I think that this made things very interesting, showing just how tenuous the relationship between Guardians and Keepers are. Unfortunately, it also makes me further question why the Guardians put up with this sort of thing.

So I’ve already covered aspects of this, so this paragraph won’t be long. Cremer has added quite a few interesting characters in her novel. I quite liked Calla’s younger brother Ansel. I know right? Ansel? I thought he was a girl! Cremer doesn’t seem to do ‘normal’ names. Another example is Dax. I’m sorry Cremer but Dax is the stuff that my dad and I used to use in our hair. It kept my hair nice and shiny, thanks to the sheen stuff and it kept it oiled (which with Afro hair is very important! My hair is forever getting dry and breaking!).

Enough mockery now. I generally liked the characters and I enjoyed the dynamic between the Banes and Nightshades. Their interactions were fascinating, and I was forever wondering when someone would do or say something bad enough to cause a fight. Let’s face it- they’re ANIMALS!

Now here’s for the important part:

A capable and strong warrior, Calla Tor should be everything you look for in a main female character. She is loyal to her packmates, she can hold her own in a fight and from time to time she can even control her infatuation with bad boy Ren. I like that she’s a tom-boy. One of the quotes that comes to mind when referring to make-up is:

“No eyes, no lips. Nothing. This is plenty. Any more and I will spontaneously combust”
Here’s the other:
“I look like a cake.”
“But a beautiful cake.”
You’ll notice that I said that Calla ‘should’ be everything you look for in a main female character. But she isn’t. The problem is that she’s missing a fundamental aspect that every bad-ass character needs. The ability to question things. Let’s face it, until Shay shows up, she accepts her lot in society. And I suppose that’s understandable. She had a fairly good position in the grand scheme of things, I suppose. And when you’re brought up in a certain way, you get used to the way things are. This is why I liked Shay. He questioned things, and I loved how he brought in Gramsci’s theory about cultural hegemony. I’m learning this in Media Studies!

So, after all that, what do I rate it? It’s tricky. I think that after everything they went through, because of the interesting world building, the romance (not the worst love triangle, mind you. I liked that it wasn’t TOO obvious who she’d choose), I will give Nightshade

Here’s a blogger who had a slightly different point of view on Nightshade. Just click the link.
0