In a desert world of sandstorms and sand-wolves, a teen girl must defy the gods to save her tribe in this mystical, atmospheric tale from the author of Drink, Slay, Love.”Liyana has trained her entire life to be the vessel of a goddess. The goddess will inhabit Liyana’s body and use magic to bring rain to the desert. But Liyana’s goddess never comes. Abandoned by her angry tribe, Liyana expects to die in the desert. Until a boy walks out of the dust in search of her.

Korbyn is a god inside his vessel, and a trickster god at that. He tells Liyana that five other gods are missing, and they set off across the desert in search of the other vessels for the desert tribes cannot survive without the magic of their gods. But the journey is dangerous, even with a god’s help. And not everyone is willing to believe the trickster god’s tale.

The closer she grows to Korbyn, the less Liyana wants to disappear to make way for her goddess. But she has no choice: She must die for her tribe to live. Unless a trickster god can help her to trick fate–or a human girl can muster some magic of her own.
– Goodreads Synopsis 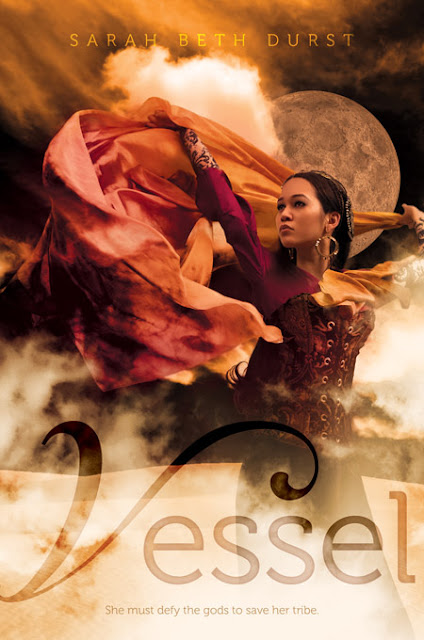 This is a stunning cover. The colours are appropriate, what with it being set in a dessert, and I love the way her cape flaps around in the wind. I’m not too sure what to think of the moon. Somehow it seems a bit out of place, and it just makes the cover look too busy. I’m glad that the model is not in a close-up shot. I’m sick of close-up shots. I love her tattoos, hinting at her tribe upbringing.

Now for my thought on the actual story. Personally, I think it sounds very intriguing. In a year where we have seen the rise of the Dystopian Genre, I’m glad to see something more original. I’m a sucker for books based on mythology, and I’m even more interested as this mythology seems original. The whole idea of a ‘vessel’ isn’t completely original though, not that I think that it’s a bad thing that Durst has used it. The original idea is called an Avatar. And I don’t mean the movie by James Cameron, although once again, it’s a similar idea. An Avatar is a human that hosts a god, much like a Vessel. Although, it Durst’s version it seems that the human dies in order to allow the god to take their body. One novel where this idea is used is in Rick Riordan’s Kane Chronicles series. In this series, the Egyptian gods can take possession of a magician and they can become the ‘eye of the god’.

The one thing I’m looking forward to the most is this trickster god as I am an avid Loki fan ever since Thor and The Avengers.

“I am loudmouth, the blogger, and I am burdened with glorious purpose”