Share
Share on Facebook Share on Twitter Pinterest Email
So,  finished this novel about last month and so this is the review I promised. It seems that the Dystopia Genre is here to stay with the bit of The Hunger Games which allegedly kick-started it off. So the big question: ‘Is Divergent original or just another Dystopia hit wannabe?’ 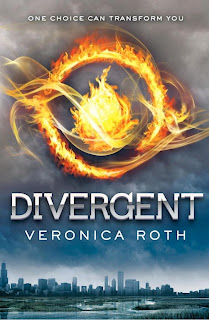 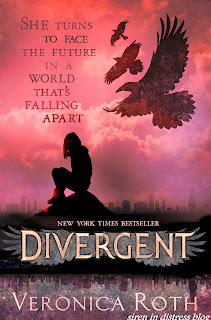 In Beatrice Prior’s dystopian Chicago, society is divided into five factions, each dedicated to the cultivation of a particular virtue—Candor (the honest), Abnegation (the selfless), Dauntless (the brave), Amity (the peaceful), and Erudite (the intelligent). On an appointed day of every year, all sixteen-year-olds must select the faction to which they will devote the rest of their lives. For Beatrice, the decision is between staying with her family and being who she really is—she can’t have both. So she makes a choice that surprises everyone, including herself.

Well, Beatrice “Tris” is one hell of an action girl. Despite all of her weaknesses, she is a kick-ass heroine. Her physical and emotional weaknesses only serve to humanise her and add to our sympathy. But let’s face it, she is certainly strong-willed. It’s clear that Beatrice has never been cut out for the life on Abnegation, but to choose another faction would be to walk away from her family. She is not the kind of girl you can walk all over, and despite the way that her fellow initiates looked at her- as if she were fresh meat- she definitely showed them up.

Four is very interesting. I can’t tell you much about him as it’ll ruin the surprise. It is important to not that this is not intended to be a very romantic book, but I feel that it is indeed more romantic than The Hunger Games. I hadn’t thought Four as a particularly obvious romantic interest but I had viewed it as a possibility, what with the air of mystery around him. I mean, what is with the name ‘Four’? I mean, I know about it NOW, but at the time it was very weird. All I could think of was Pittacus Lore’s ‘I Am Number Four’. I don’t think Roth’s Four and Lore’s Four are alike.

Additional Friends: I very much liked Christina. I have a friend called Christina. But she’s the white one and I’m the black one, lols. Having been Candor born, Christina always speaks honestly. Which she later learns is not a good idea. She adds a bit of humour and her interaction with Tris is significant as they help each other out during the initiation. Al is another character who was important. He’s a really big guy and he seems nice at first, but not all is as it seems.

Needless to say, Tris makes a number of enemies as she goes along. Some are fellow initiates, whilst others have the power and authority to terminate her. I shan’t give anything away 🙂

Roth has created a unique society in which people are divided by what they believe in. I have concluded that I would be Candor as it basically just gives me a licence to speak my mind all of the time, which is good because I’m a complete chatter box! I liked the idea that the town or city or whatever is ruled by Abnegation, as they are the selfless ones. I genuinely feared that they might have gone out of control, considering the amount of power that they wielded. But it was another faction that was to bring about the downfall of this society.

My only real criticism is that I don’t understand how their society got to this. What kind of catastrophic event could have led a society to this?

So which faction would you choose if you had to?

Well, without giving away too much, it is a novel of self-discovery. This is pretty good start for a YA book because of the audience. Tris got out of her comfort zone a lot. Now one might wonder why she is trying to be something that she is not. Perhaps she is trying to be the girl that she’s always been. By the end of the novel, she realises that she doesn’t truly belong anywhere. Sorry if that spoiled everything for you. Still, this is a Dysptopian book. It’s hardly going to have a Happily Ever After.
The idea is that the initiates can only become fully pledged members of their new factions if they pass the tests. It’s hard to explain this without giving away which faction Tris chooses, but the point is that hers is a test of endurance. The problem with their initiation is that there are not enough spaces for all of the initiates, and those that fail will become factionless. This is a fate that Tris has described as worse than death on a number of occasions. I actually don’t think that she’s being overdramatic either.
So essentially, Tris must survive or die trying.

Okay, first up: Katniss vs Beatrice.
Katniss is the family provider. Beatrice is the selfish one in a selfless family. Katniss has a bow and arrow. Tris learns hand-to-hand combat quite well. Katniss has a Mockingjay pin. Tris has a few tattoos. Now this doesn’t really equate. Tris’ tattoos aren’t a sign of rebellion, and so far they have not been perceived as such. Both girls are strong-willed, very driven and in some ways inherently selfish. But in actual fact, Tris’ bravery comes down to her skill to be selfless thanks to her Abnegation upbringing, whilst Katniss has at this stage done more things that she is not proud of. Bearing in mind, I’ve only read the first in Roth’s series.
The society is a bit like The Hunger Games in the sense that they are all divided, but this is where the resemblance stops. For a start, the children do mix whilst they are at school. As for the adults, well, not too often. The way that everything is so heavily monitored, particularly in Abnegation reminds me a bit of Ally Condie’s ‘Matched’. The closest to the match-pairing they get though is the fact that you can only marry someone within your own faction. Thankfully, the society doesn’t choose for you.
Overall, this is at least a FOUR STARS

The Mark of Athena Cover Reveal