I hadn’t initially intended on reading this book. I was satisfied with the ending of The Iron Queen. What can I say? I like a good tragedy from time to time. If I can’t have Ash, no one can! But honestly, it took until the end of this book until I was satisfied with Meg’s decision. In the first book, I won’t say that I didn’t like Ash. The whole ‘I’m going to kill you’ thing was actually kind of amusing. But I was Team Puck for the majority of the time, and by the third book I still hadn’t truly made up my mind. The Iron Knight erased all doubts. And this is why….

But first, let’s take a while to look over at the synopsis and awesome trailer. 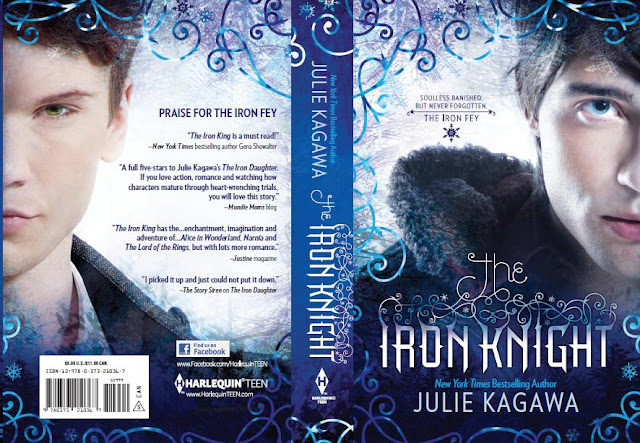 Ash, former prince of the Winter Court, gave up everything. His title, his home, even his vow of loyalty. All for a girl… and all for nothing.

Unless he can earn a soul.

To cold, emotionless faery prince Ash, love was a weakness for mortals and fools. His own love had died a horrible death, killing any gentler feelings the Winter prince might have had. Or so he thought.

Then Meghan Chase—a half human, half fey slip of a girl— smashed through his barricades, binding him to her irrevocably with his oath to be her knight. And when all of Faery nearly fell to the Iron fey, she severed their bond to save his life. Meghan is now the Iron Queen, ruler of a realm where no Winter or Summer fey can survive.

With the (unwelcome) company of his archrival, Summer Court prankster Puck, and the infuriating cait sith Grimalkin, Ash begins a journey he is bound to see through to its end— a quest to find a way to honor his solemn vow to stand by Meghan’s side.

To survive in the Iron realm, Ash must have a soul and a mortal body. But the tests he must face to earn these things are impossible. At least, no one has ever passed to tell the tale.

And then Ash learns something that changes everything. A truth that turns reality upside down, challenges his darkest beliefs and shows him that, sometimes, it takes more than courage to make the ultimate sacrifice.

Beautiful, as usual. It was nice to have Ash at the front and Puck at the back, with that slight rueful smile. Once again the theme is blue for Winter, as it was in The Iron Daughter. I used to have a thing against seeing faces on covers as it doesn’t give me much room to imagine what the characters look like for myself. Unfortunately, many YA books still have photographs of characters on the front cover. For the most part, however, Kagawa’s books have been handled with care and the characters look more or less how I would imagine them. But on to the important things that the author actually has something to do with.

I have this thing about descriptions. I like them. They’re very important as its what lets you truly imagine. But I have this awful tendency of skipping them when they get too much. I think that Kagawa handles them with care though. It’s not over the top but it’s enough, and very well done. This is especially important in fantasy books because impossible settings are brought to life. I particularly liked her description of The End of the World and the river that they followed.

Grimalkin & the Wolf: What can I say? Their banter was the next best thing since Puck and Ash. The cait sith is  forever calling the Wolf a dog, and he takes great offence to this, of course. I hadn’t expected to like the Wolf, though I never got to read Winter’s Passage, which is a shame. Still, it was very clear that the Wolf was bad news as soon as he appeared, and I was terrified he’d kill someone I loved, like Puck! I mean, pffh, of course Ash was going to live. Grimalkin was the same old, same old. Infuriating, cryptic, and wise. Kagawa even slipped in his famous line: I am a cat! Love it.

Ash: This is his story and it was a pleasure to finally get into his mind. I was mad that he was only doing this whole quest to keep his stupid oath so that he wouldn’t unravel and die, or worse. In the end, I was satisfied because he made up his mind on his own, with no oath to dictate his decision. Throughout the tests, he finally found out what it meant to be mortal, and he came to finally face all the horrors he had committed in the past. Ash really grew in this novel and I loved seeing him finally discover who he is really was. Not Ash, the Winter Prince- the cold and ruthless faery he had come to despise. He is the Iron Knight.

Puck: This book wasn’t about him, of course and as usual, we didn’t get to delve too deep into his character. On the other hand, I think that he was vital in this novel. Puck was Ash’s best friend before Ariella died and he swore to kill him to avenge her. He provided the comic relief, as usual, which was good because this quest was very important and death defying. The two of them finally resolved the feud between them and I just wanted to cry from the bromance 😀

I know that there is another vital character that I’ve missed out but mentioning them would be a spoiler!

Having recently read The Goddess Test, I wasn’t expecting much. Having finished the book, I was just overwhelmed with the AWESOMENESS it radiated! It was… awesome! I was surprised that they all had to have these almost tests (running the gauntlet) to get to The End of the World. They were tests of strength and knowledge. Trust the sphinx’s to give an impossible riddle. Ash had three tests on his own, given to him by the Guardian so he could understand what it meant to be mortal. I don’t want to give too much away about them but I can’t believe that these tests were this hard. How is it that in YA books, the tests for mortality (the soul) is harder than the tests for immortality (The Goddess Test)? Very strange.

Ending- Tying up the loose ends

The ending was incredibly romantic and although their were no church bells, there really didn’t need to be! I’m honestly going to have to say that I’m glad that they didn’t leave the Wolf behind, despite what Grimalkin had to say. Puck will have to get over Meg at some point, and I hope that he appears in the sequel series, The Call of the Forgotten: The Lost Prince being the first book.  So now I am finally, truly and utterly, Team Ash!

I’m A Geek on Greeks