I have loved Greek Mythology ever since I was taught about it in year 5 when I was about 9 years old. It was also on the curriculum when I was in year 7, at 11-12 years old. I remember having an argument with a friend of mine on the pronunciation of Persephone’s name. I said ‘Purse-eh-phone’, she said ‘Purse-eh-feh-nee’. We agreed to disagree but I am now forced to admit that she was right. Phone’s hadn’t even been invented them so I thought it was really funny.

So Greek adaptations have allegedly become the new ‘vampire’, as in they are all of a sudden very popular. This trend began last year in 2011 with YA books, though Rick Riordan writes children’s books and his series have been around much longer than this. These books include Meg Cabot’s ‘Abandon’, but here I’ll compare the greek myth adaptations that I have read up to date, YA or not.

This book was interesting and it had a very different angle to all of the others. In this book, the gods are all fading, whilst many are already gone. Iris comes across a magical… and visits a number of the gods. This includes Athena and Artemis who are now private investigators; Apollo the saxophonist (Yah! He’s playing my instrument.); Ares the lawyer (I couldn’t believe it either but I thought it was actually really smart), and so on.

Percy Jackson is about to be kicked out of boarding school… again. And that’s the least of his troubles. Lately, mythological monsters and the gods of Mount Olympus seem to be walking straight out of the pages of Percy’s Greek mythology textbook and into his life. And worse, he’s angered a few of them. Zeus’ master lightning bolt has been stolen, and Percy is the prime suspect.

Now Percy and his friends have just ten days to find and return Zeus’ stolen property and bring peace to a warring Mount Olympus. But to succeed on his quest, Percy will have to do more than catch the true thief: he must come to terms with the father who abandoned him; solve the riddle of the Oracle, which warns him of betrayal by a friend; and unravel a treachery more powerful than the gods themselves.

– Goodreads summary for The Lightning Thief

This series is wonderfully written, and amongst my favourite books- ever! It is engaging enough for children as young as 9 but intelligently written enough for adults, which is something actually pretty rare. Riordan has a wit and flair that I have seen demonstrated by few authors, with Eoin Colfer being one of the others. This series does not tell the myths all over again like Deming’s Iris Messenger does, which is good because us educated readers won’t be bored stiff, but those who know nothing of Greek mythology can still learn some of the versions. Riordan instead incorporates these ancient myths into modern day America, with a strong and likeable character leading. Another awesome and very Rick Riordan thing is the name of his chapters. Tgey are just hilarious! His first ever chapter in this series is called ‘I Vaporise My Maths Teacher’ (though I believe it’s pre-algebra teacher for you Americans).

The Lightning Thief is followed by:
The Sea of Monsters
The Titan’s Curse
The Battle of the Labyrinth
The Demi-god Files (novella)
and The Last Olympian 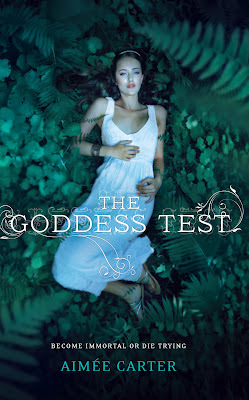 EVERY GIRL WHO HAS TAKEN THE TEST HAS DIED.

It’s always been just Kate and her mom–and her mother is dying. Her last wish? To move back to her childhood home. So Kate’s going to start at a new school with no friends, no other family and the fear that her mother won’t live past the fall.

Then she meets Henry. Dark. Tortured. And mesmerizing. He claims to be Hades, god of the Underworld–and if she accepts his bargain, he’ll keep her mother alive while Kate tries to pass seven tests.

Kate is sure he’s crazy–until she sees him bring a girl back from the dead. Now saving her mother seems crazily possible. If she suceeds, she’ll become Henry’s future bride and a goddess.


This is a very good book with Romance, a dash of mystery, and sort of Actual gods, unlike oh. my. gods. Sort of. Check my Archive for my full review. 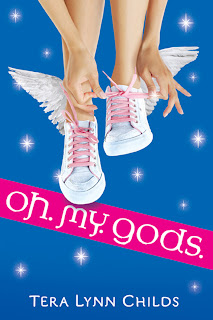 A modern girl’s comedic odyssey in a school filled with the descendants of Greek gods.
When Phoebe’s mom returns from Greece with a new husband and moves them to an island in the Aegean, Phoebe’s plans for her senior year and track season are ancient history. Now she must attend the uberexclusive academy, where admission depends on pedigree, namely, ancestry from Zeus, Hera, and other Greek gods. That’s right, they’re real, not myth, and their teen descendants are like the classical heroes: supersmart and superbeautiful with a few superpowers. And now they’re on her track team! Armed only with her Nikes and the will to win, Phoebe races to find her place among the gods.
-summary from Goodreads
This series promises something I don’t get very much from Riordan’s Percy Jackson series- Romance! It was an entertaining, light-hearted read where the fate of the world never once hung in the balance. Not even a single monster appeared. Whilst in some instances, this had me a little sad, but I enjoyed seeing the myth adaptation in a different angle. If you want the fun of Greek myth and romance, this is a book for you. I found the sequel: Goddess Boot Camp somewhat lacking in contrast to the first book but I liked the protagonist, Phoebe nonetheless. I do have to warn you though: NO GODS APPEAR- NOT ONCE! 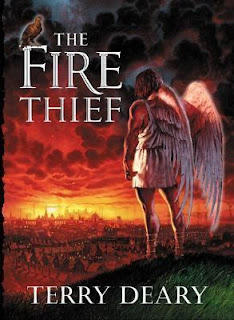 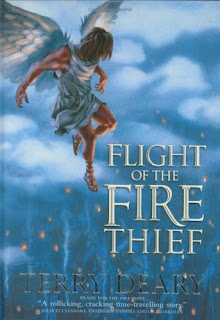 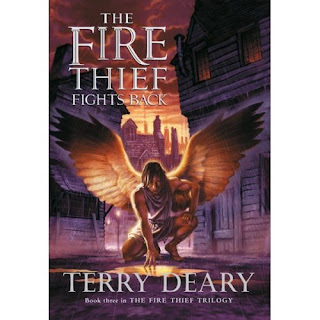 To escape the gods’ revenge, Prometheus travels through time to Eden City in 1858. There, he befriends a young orphan, actor, and petty criminal named Jim. When Jim runs into trouble with the law, Prometheus is torn — if he uses his powers to get his friend out of trouble, he will betray his hiding place to the gods. Terry Deary masterfully interweaves two plots, with action jumping at a whirlwind pace from Mount Olympus to the seedy taverns and elegant mansions of Victorian Eden City. Packed with puns, wisecracks, and sarcastic footnotes, The Fire Thief turns Greek mythology into a laughing matter.
– summary from Goodreads
This series is very different from the others as it follows the story of Prometheus himself. Although referred to as a demigod in this series, Prometheus was a Titan. Though related to Zeus and the others as cousins, Theus (as he is referred to) is well known for being punished by Zeus himself for stealing fire from the gods and giving it to mortals.

13-year-old Pandora Atheneus Andromaeche Helena (or Pandy, for short) has no idea what she’ll bring for her school project. By accident she discovers a simple box, said to contain something so terrifying and horrible that no one must ever, ever touch it for fear of inflicting all of mankind with the wrath of the Gods and Goddesses.  This, of course, makes the box the perfect thing for Pandora to bring for her school project.  Unfortunately, things don’t go quite the way she was hoping, and the box accidentally gets opened, unleashing all kinds of evil and misery into the world.  Hauled before Zeus, Hera and the rest of immortals, Pandy’s given the task of collecting all the evils within a year’s time.
– Goodreads summary
An Island that Shouldn’t Exist…
A Life He Didn’t Know…
A Destiny That Can’t Be Escaped

There was no turning back. We were going to set into motion a revolution that could either save Atlantis or leave it destroyed in the process.

Sixteen-year-old Trey Atlas’ known life is a lie. While he was raised in Miami, Trey was actually born in Atlantis. Sent off the legendary island as a baby for his own safety, Trey is the only living heir to the Atlantean throne. Whether he likes it or not, Trey has to go back to his birthplace and accept his role as the Ruling Prince and lead the revolution to defeat the Knights of the Abyss. Otherwise, thousands of innocent lives and his true family legacy could be lost forever.

The Goddess Test by Aimee Carter

The Iron Knight by Julie Kagawa