I rate this FIVE stars 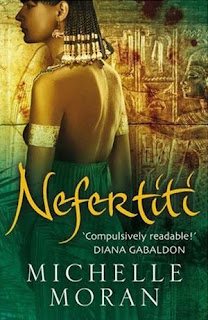 Unlock the world of anceint Egypt in Nefertiti.
Nefertiti is the story of Nefertiti, a queen of ancient day Egypt, famed for her beauty. The interesting thing about the novel is that it is narrated by her sister, Mutnodjmet. The story starts when Nefertiti is 15 and Mutny is 13, after the death of Tuthmosis. The world of Ancient Egypt is brought to life by Michelle Moran. She dates her chapters, a necessity for historical based novels, and even goes as far stating the seasons. I found this a nice touch because she uses the seasons of Ancient Egypt.
Sisterhood is tested to the limit as Nefertiti attempts to keep her sister to herself, not wanting her to marry. Will Mutnodjmet be able to be with the man she loves when he is not particularly Pharoah’s favourite person?

﻿When Akhenaten bans the worship of all gods other than Aten, a god hardly anyone knows of, will Egypts people survive? For many generations, the Ancient Egyptians have worshiped gods such as Isis, Osiris, Hathor and Horus. What will its people think of the Pharoah who is later to be known as the ‘Heretic King’? Political intrigue is created through this particularly character’s contoversy. And whether you love or hate Nefertiti, one could believe that she was indeed a powerful queen, and perhaps Pharoah.

A Kiss in Time