This review has been a long time coming. I think the book came out maybe 4 years ago? I only read it in July though, but I was too lazy to actually review it. Now I’m at university, scrounging for the time to do anything I actually want to, haha.

This book has layer upon layer of mystery.

Kaylee Cavanaugh is a normal girl whose life comes crumbling down when she becomes possessed the urge to scream. when  we start the book, it isn’t her first time to scream. she had these episodes before but they get progressively worse.
Beautiful girls are dying around her, and Kaylee seeks to discover why.  Of course this could have dangerous consequences. No one will tell her what is happening , why it’s happening, and how it is happening. 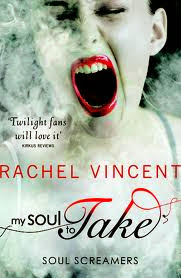 Rachel Vincent brings something new to the myth of faeries.  There is intrigue, romance, and action. this novel mostly deals with Reapers and the Banshees, (mostly referred to as bean sidhe in this novel) but I do believe that there were mentions of demons and other creatures that live on another astral plane.

Now, let’s talk about the fun part : The Love Interest.

From what I recall, Nash is the kind of guy who isn’t supposed to know of the existence of the main character.  So when he does notices Kaylee at a party, she is very smitten.  Nash turns out to know more about Kaylee’s secret than she does, but I won’t spoil about how he knows!
I found myself comparing Nash to my ideal boyfriend, who is Seth from Melissa Marr’s “Wicked Lovely” series. Honestly, I could have a whole conversation about why Seth is the perfect boyfriend — but this is a review about “My Soul to Take” !  Nash isn’t quite Seth perfect but he is still rather understanding of a lot of things. He is kind and considerate but  I have to take a few brownie points because of the whole secret thing. And he’s almost a little too perfect. When will his skeletons come out of the closet?

As far as the secret goes ,  Kaylee’s family should not have kept it from her. but I understand their logic — as infuriating as it was! Her father, was the worst culprit.  He made me so angry!
Another very good mystery, was the whole business of the reapers.  It reminded me  of Victoria Scott’s  “Dante Walker” series but without the idea of God and the devil. As the name suggests, Reapers take souls to the next place: be that heaven, hell or wherever. I’m sure Vincent will explain all that stuff later in the series.

Let’s talk about Kaylee as a person. She’s actually  a rather likeable character. I felt something, rather than being indifferent or wanting to kill her. She was an angsty teenager without being completely overwhelming about how suckish her life is. She had a mental breakdown prior to the beginning of this novel, leading her to being put on medication. I think Vincent handled her problem rather delicately. She wasn’t all depressed and sick of the world. Instead she found good friends to talk to, and admittedly, she did try to speak to her family, and I think she come across as a strong, independent character without being an asshole. She wasn’t full on Female Warrior, but she wasn’t a damsel in distress. I’d say she falls somewhere in the middle, if I have to make comparisons.

My major concern was the love interest, Nash. Although he is a lovely guy, I did find the relationship rather convenient and quite honestly, not particularly believable. Kaylee is one of those infuriating YA characters who doesn’t think she’s beautiful —a trend that MUST be bucked at some point, people!

“If Eastlake High School were the universe, I would be one of the moons circling Planet Emma, constantly hidden by her shadow, and glad to be there. Nash Hudson would be one of the stars: too bright to look at, too hot to touch and at the center of his own solar system.”

So of course when the hot guy Nash seeks her attention, she has no idea why! This in itself isn’t my main concern, but the fact that their relationship started so quickly worries me. I am going to have completely unrealistic ideals in a relationship, haha!

Please take a moment to enjoy the quotes below. I hope they don’t spoil things for you.

“He was an arrogant little demon.”
“So what happened?” I asked.
“I punched him.”
For a moment, we stared at him in silence. “You punched the reaper?” I asked, and my hand fell from the strainer onto the edge of the sink.
“Yeah.” He chuckled at the memory, and his grin brought out one of my own.

“My aunt and overprivileged cousin only recognize two states of being: glitter and grunge. And if you weren’t glitter, well, that only left one other option.”

“Why do you hang out with him?”
“We’re teammates.”
Ahhh. And if blood was thicker than water, then football, evidently, would congeal in one’s veins.”

Blood of Eden: The Eternity Cure by Julie Kagawa