Sorry it’s been so long since I’ve blogged. I’ve just started a Computer Science course at University, and YIKES! Fresher’s Week was intense. A rollercoaster of emotions including partying, fresher’s flue, and orientation lectures, haha!

So I finally got round to reading The Eternity Cure. I don’t usually buy books through Amazon but I’ve bought quite a number of things since getting my first Debit card. 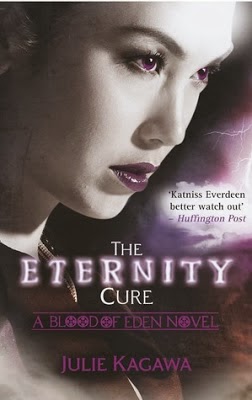 Allie is back and she’s fiercer than ever. Through all the trials and tribulations she faces- terrible jokes made by Jackal, cannibal mole men and of course, the demented Sarren- she gives it her all.

Sarren is batshit crazy– nothing different there I guess.

Jackal was there too but strangely enough, this time he was my my favorite character. His history with Kanin is finally revealed 🙂 hehe. Personally I think it proves that you can be a monster even before you become a vampire.
Some people criticize that Allie and Zeke are boring. This might be in part due to the trope of forbidden love and and their point of view on morality. Jackals is refreshing because he knows what he is and he likes what he is. He is a monster and never claims to be anything but a monster. Unlike Kanin he does not seek to better the world- Unless you count Jackal as king a form of peace. Spoiler alert: We discover his real name!

For some people this was a fairly slow read. . I rather liked the pacing, myself. Just because Allie is a vampire, does not mean that she can travel at the speed of lightning. There were many difficult choices for her to make along the way.  Allie is a bass on many levels.. not only can she holder only in fight against other great vampire, but constantly having to fight against her own demons. .and a twist of fate when she has to work with the one vampire she would rather kill. in order I find. her sire, . she does S anyway. Sure, working with Jackal is no walk in the park, but she manages it.

Now let’s talk about the villain for a minute. Julie, please, Julie, why?! . I read the Sarren parts to my sister . in a creepy voice. and she was officially creeped out– petrified even!  If a character is meant to be a reflection of the author, then I really don’t want to know what Sarren is supposed to reflect!

I mean, check these lines out:

Perhaps, I will pluck out both your eyes, then remove all your teeth, and make a necklace from them. Or maybe a wind chime. I do love wind chimes, don’t you, little bird?“

He’s also always blathering on about music. In this book it was about a ‘final requim’. The only thing that will be final will be the end of his existence! He makes me so mad. But it was really disturbing how good I got my impression of him– like I must be crazy as well.

Is it even a spoiler to mention that Zeke returns? I mean seriously, it’s a given!

But seriously, the ending is devastating.
I tweeted the author Julie Kagawa about.my reaction to the end of the novel, which was basically me crying my eyes out– like, UGLY crying in the middle of the night. . do you   want to know her reaction? . she tweeted me: “Thanks, Your tears feed my Muse”. . it was awesome of her to reply, but MAN was that a creepy response 😛

Here it is in case you don’t believe me: 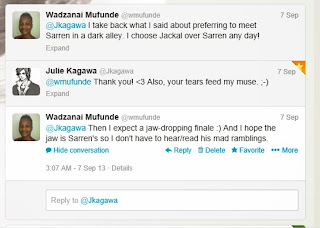 Got to love Julie though 😀
Anyway, I give The Eternity Cure 4/5 starts!

More Than Skin Deep- a short story written by me.

My Soul to Take by Rachel Vincent Review