Dante Walker is flippin’ awesome, and he knows it. His good looks, killer charm, and stellar confidence has made him one of hell’s best—a soul collector. His job is simple, weed through humanity and label those round rears with a big red good or bad stamp. Old Saint Nick gets the good guys, and he gets the fun ones. Bag-and-tag.

Sealing souls is nothing personal. Dante’s an equal opportunity collector and doesn’t want it any other way. But he’ll have to adjust, because Boss Man has given him a new assignment:

Dante doesn’t know why Boss Man wants Charlie, nor does he care. This assignment means only one thing to him, and that’s a permanent ticket out of hell. But after Dante meets the quirky, Nerd Alert chick he’s come to collect—he realizes this assignment will test his abilities as a collector, and uncover emotions deeply buried. 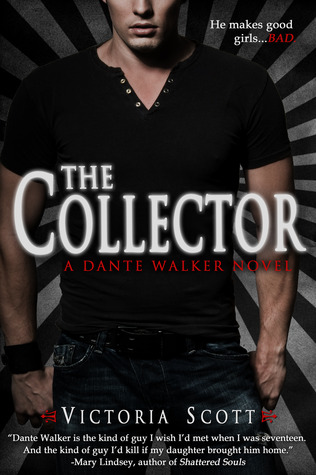 This book sounds very interesting. The cover is simple, yet intriguing. I very much like the concept. Whilst the whole bad-boy thing has been over done in the past, particularly in  YA, I have a feeling that Victoria Scott will be injecting some originality to it, judging from her new official book website, www.dantewalker.com I can’t wait that long for this book to come out. Why do these authors torture me so?