I had the fortune of coming across this book in my digital local library. After reading the synopsis, I knew that it was for me. 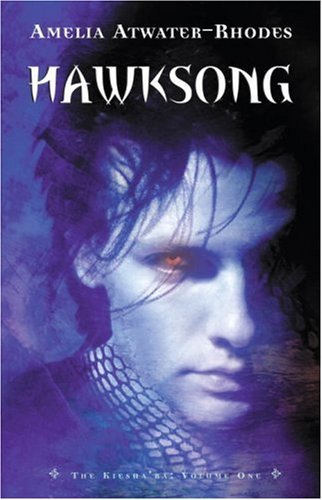 DANICA SHARDAE IS an avian shapeshifter, and the golden hawk’s form in which she takes to the sky is as natural to her as the human one that graces her on land. The only thing more familiar to her is war: It has raged between her people and the serpiente for so long, no one can remember how the fighting began. As heir to the avian throne, she’ll do anything in her power to stop this war—even accept Zane Cobriana, the terrifying leader of her kind’s greatest enemy, as her pair bond and make the two royal families one.

Trust. It is all Zane asks of Danica—and all they ask of their people—but it may be more than she can give.

I won’t lie. This wasn’t the most original plot I’ve ever heard, but I feel that it was handled with such care, that I loved it. Danica is the princess of her people, and Zane is a prince. Their kingdoms have been at war for centuries, making the feud between the Capulets and Montague’s look like a childish spat. I genuinely thought that this had the potential to be a tragedy, much like Romeo and Juliet or Tristan and Isolde. At first, their union is tenuous at best, what with the lack of trust. Getting to know Zane better from Danica’s perspective was very interesting. I enjoyed seeing their relationship blossom slowly.

Where I do draw the line, however, is the ‘mystery’. Granted that I didn’t uncover one of the assassins myself, it was otherwise very obvious who the other one was at least. The idea that Zane might be surprised is understandable, but Danica really should have known better. I do wish that the novel had more twists and turns, but this is why I believe that it is more of a character driven novel, rather than a plot driven one. For what it is, it is a rather gripping tale, however. I finished it in one sitting, on my iPhone, until about 2AM because I’d started it late.

The creatures that A.R. created were altogether unique. Admittedly, the Serpiente were my favourite. All the characters are shifters, and they have inherited their second form from an animal. Therefore, Zane is a cobra, and Danica is a hawk. I liked the differences that they had, but I liked that Zane did point out that both had something in common: They both descended from humans and had a human form. I really enjoyed the old world feel it had, although from what I recall, the date is never specified. Or if it is, it isn’t clear whether it is the same year for the humans, as their societies are different.

I can’t say very much about the characters, unless you want me to ruin the whole story. I mean, it’s not very long, at 243 pages. The one thing I’d like to point out is that some of the relationships could have been expanded on. Danica and her mother for instance seem rather distant but we don’t know how it came to be that way. I like how at first Zane is compared to Vasili, the guy Danica was once promised to wed before he died, but eventually comes into his own and becomes his own person. When he becomes incomparable to anyone else, that’s when we know she loves him.
I, however, couldn’t help but compare him to a certain Winter Prince. Ash would be furious if he knew someone was comparing him to another character, but what can I say? For me, I found it amusing that both once wanted to kill the girl that they eventually fell for. Their major difference, however, is that whilst Ash remains frozen, and locks everyone out, Zane is more approachable… well, if you’re a serpiente, haha! He’s actually outgoing, and the type to wear his emotions on his sleeves.
So whilst I can’t really compare to many of my other reads, I feel that I’d ought to give this one…

3 STARS!
It would have been four stars, if not for the lack of good sub-plots.
0

The Collector by Victoria Scott