Today it was a fairy tale…

This stunning debut captures the grotesque madness of a mystical under-land, as well as a girl’s pangs of first love and independence. Alyssa Gardner hears the whispers of bugs and flowers—precisely the affliction that landed her mother in a mental hospital years before. This family curse stretches back to her ancestor Alice Liddell, the real-life inspiration for Lewis Carroll’s Alice’s Adventures in Wonderland. Alyssa might be crazy, but she manages to keep it together. For now.When her mother’s mental health takes a turn for the worse, Alyssa learns that what she thought was fiction is based in terrifying reality. The real Wonderland is a place far darker and more twisted than Lewis Carroll ever let on. There, Alyssa must pass a series of tests, including draining an ocean of Alice’s tears, waking the slumbering tea party, and subduing a vicious bandersnatch, to fix Alice’s mistakes and save her family. She must also decide whom to trust: Jeb, her gorgeous best friend and secret crush, or the sexy but suspicious Morpheus, her guide through Wonderland, who may have dark motives of his own. 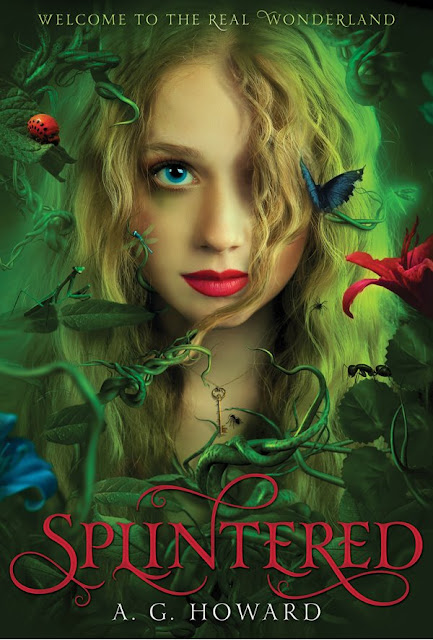 Having thoroughly enjoyed Tim Burton’s take on Alice in Wonderland when it hit cinemas a few years ago, I knew that this book would appeal to me instantly. It promises a dark world with new adventures and mysteries galore. I certainly hope that it delivers.

This cover intrigues me. I’m not too sure what to think about having a profile picture of the main character like that. I often think that this can take out the fun of discovering the character yourself, as you can gain misconceptions about their personality. having said that, I think that it is a rather flattering picture. I love the photo manipulation here.What it really brings across to me is the wildness of Wondeerland. The bugs are creepy, but it’s the vines that set me on edge. It suggests that she might be strangled.

The curly typography really suits it, giving it a vine-like appearance. The scarlet is eye-catching, whilst also being complementary, due to the model having a similar coloured lip stick. Finally, I am also very curious about the key that she is wearing. I hope it actually features in the book.

Well, that’s my thought on it. What’s yours?

What’s Left of Me by Kat Zhang