I was incredibly skeptical to read this book, which is the first of the new Blood of Eden series. I know the saying goes ‘don’t judge a book by its cover’, but I’ve long since given on it. I judge books by their covers and I’m not ashamed. Kagawa’s cover is quite simply morbid and terrifying, though artistic. What’s more, I just didn’t want to read another vampire book. I liked the Twilight saga to begin with, but Bella annoyed my senseless, and I now no longer have a clue what I first saw in the series. Melissa de la Cruz’s Blue Bloods series is the only other series I’ve read with vampires and the thing is, they’re more than that. Nonetheless, I read an excerpt of Kagawa’s new book, wanting to give it a chance- especially after hearing good reviews about it. 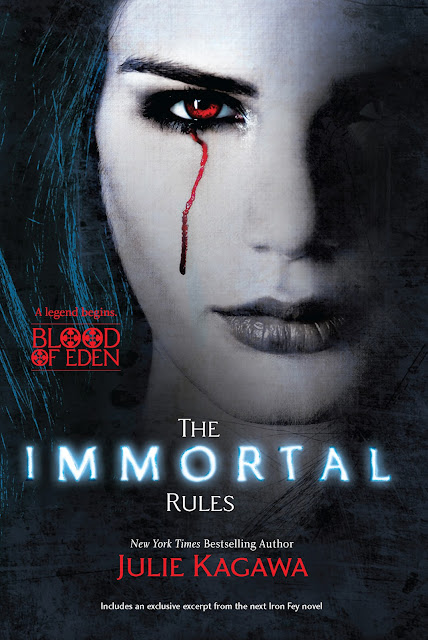 I liked and admired Allison Sekemoto. Her voice didn’t irritate me, as some female protagonists have in the past. I felt sorry for her in the beginning, after seeing how awful her life was but I doubt she would want my pity. She is strong willed and very determined. This reminds me an awful lot of Katniss Everdeen from The Hunger Games. The world that they live in has shaped them and forced them to become very self reliant and independent. The difference is that Allie believes that it’s everyone for themselves, whilst Katniss looks after her family and even hunts with Gale. Although you can say that because Allie is part of a small group of Unregisters, they are not her family and she admitted that she would never sacrifice herself for any of them.

Allie has always hated vampires and I can’t blame her. I found it a bit hypocritical that she became the creature that she most loathed, but I understand that the human to want to live. Her choices were simple, become a vamire and ‘live’, or die and possibly become a rabid. Allie’s vampire transformation reminded me of Aislinn’s change from human to faery in Melissa Marr’s Wicked Lovely series, as she too hated and feared the creature she would become. The main difference is the whole near death experience, which Ash was not in, and the choice, as Ash had none.

Allison is stubborn, often disagreeing and going against her creator’s commands. This stubbornness does help her control the blood lust later on, when she is a vampire though. She is at first a little naive, hoping to be a ‘good’ vampire, but she eventually comes to terms with the fact that she is a monster. Thankfully, this doesn’t make her give up on humanity, as she became very attached to a group of humans that she travelled with.

It’s never said how old he is but all I know is that it’s been 60 years since the Red-Lung disease first hit the world, becoming a wide spread plague. Kanin- this may or may not be his real name, I think not- is the infuriating secretive type. The sort of person who can be very cryptic. It’s no wonder he doesn’t just speak in riddles. That really would drive me insane. At first, I thought that he was slightly cruel, but we learn why that is so. He is a very lonely character, telling Allie from the beginning that they would not be able to travel with one another for very long. He is blunt to a point, telling Allison quite clearly what she is- a monster. I wanted to laugh out loud when he said that animal blood is junk food. Tell that to Edward Cullen! It’s hard to say whether I like him or not. A part of me dislikes him for… well, you’ll find out. But then again, he’s so filled with self loathing, a part of me want to hug him real tight and tell him it’s all going to be okay. He’d probably just tear my throat out. Or maybe not. He seems to be very in control of himself.

Oh my gosh! How can such a lovely person exist in such a world? He reminds me of Peeta for this reason. Peeta had never known the true harshness of District 12, as his parents were bakers. This didn’t make him wealthy or anything, just not a starving street kid. Zeke has all the traits you look for in a YA love interest. Unless of course you very much inclined towards a bad boy, in which case, look elsewhere. Zeke, first and foremost, is the son of a preacher man. I like Zeke’s morals. He doesn’t like to ever leave a man behind on the group’s dangerous travels. He believes that there is good in humanity, and he doesn’t like to turn anyone who wishes to travel with the group. Even a dangerous vampire like Allie, you ask? No. Even he doesn’t stretch that far, unfortunately. I like Zeke because he’s like a beacon of light in an otherwise dark world.

The dystopian world that Kagawa created is the sort of thing I’ve only ever heard in movies. The sort of movies that I would never watch because I’d be peeing myself from fear. Yet somehow it’s alright to read about them. Don’t ask me how that works, but it just does. I’m sure I’m not the only one who feels that way.  Growing up in a vampire city, Allie and other humans are treated as blood cattle. They are allowed to live because vampires need them and therefore allow them to. Allie lives in a run down place called New Covington, in the Fringes of sector 4. Sound a little bit Hunger Games like? Yeah, I thought so too. Strangely enough, the centre of the vampire city isn’t much like the Capitol at all. It’s just as run down as the rest of the city. Humans actually have a choice about whether they want to be Registered or not. If they become registered, they are the property of Prince Salazar, the Master vampire of the city. This means that twice a month, they must donate some of their blood. If they miss a bloodletting, guards come and take all the blood that is owed by force. Now imagine if you were sick, or had missed multiple blood lettings.

But vampires are not the worse creatures around. Outside the Wall of New Covington, and around the entire world, ferocious creatures called rabids roam around. Neither human nor truly vampire, they are mindless creatures whose only priority is to kill. Like vampires, they are ‘allergic’ to the sun, but by night, they literally erupt from the ground and prowl the lands. In my mind, they are like vampire-zombies.

Kagawa divided her book into four parts.
Part I: Human- This is rather like an introduction into Allie’s world. We gain an insight into her hard life as an Unregistered, living in a vampire city. I enjoyed this part because we got to know what Allie was like before she was a vampire.
Part II: Vampire- After being Turned, Allie gets coached about the ways of the vampires by her creator. I’ve heard some people criticise that they would rather have had Allie figure things out on her own. Realistically, I don’t know whether she would have survived all on her own. Kanin taught her how to fight, and the basics of what being a vampire was. He also told her a handy trick about burying oneself in the dirt to avoid the sun.
Part III: Monster- In this section, Allie fights her inner demons as she tries to avoid the savageness that is her inner vampire. It’s the part of her that sees humans as nothing more than food, that will kill first, ask questions never.
Part IV: Wanderer- Allie is on her own again, and she tries to find some sort of purpose in her ‘life’, beyond sating the Hunger.
Overall, the book is rather evenly paced throughout, but most of the really good stuff happens towards the end. This kind of sucks but I didn’t mind. Everything came together and the pieces of the puzzle finally made sense. Throughout the novel, we are given fragments, and Allison has to put them together. There are a few things that I saw coming well before Allison, but maybe I’ll put it down to all the ‘near death’ experiences and the Hunger gnawing down at her.

This book was actually good, considering that I had been incredibly skeptical. I fell in love with Kagawa’s faeries, and now I’m captivated by her vampire world. I realised when she met up with the travelling group why it’s called Blood of Eden, and I thought it was really clever. Having faced betrayal earlier on in the book, I wasn’t sure how things were going to go in terms of Allison’s growth. I was disappointed that the crazy, poetic vampire didn’t feature very much, and I can’t wait to see this psychopath in the sequel. The ending of the book was alright, as it’s rather bitter sweet, but I liked that it ended with her fighting more rabies. This is because it emphasised the danger of the world Allison lives in but also highlights her bad-assery. As for the romance, I’m only going to gloss over this because it is not the main feature of this book. I’m pretty sure you can guess who the love interest is. It’s very interesting that the prey and predator are in love, more so than in Twilight because we get to see what it’s like for the vampire to try and resist. Like The Hunger Games, and actually, many other good books, their are casualties. Being a dystopian book, however, more people die than usual. I remember that the first significant death in The Percy Jackson series wasn’t until Book 3, and Book 4 had quite a number of deaths. If this is how bad it is in the first book of The Blood of Eden series, I can’t imagine how heart-wrenching the sequels will be.
My Rating: