I don’t re-read books very often. My life is just far too busy for this. Urm, no. I just have a short attention span at times. I usually have to wait a very long time to re-read a book as I remember way too much. This is more so with books than with movies. Anyone out there who feels the same? Anyway, here are the books that I’ve re-read in the past. I only re-read Ink Exchange a month or too. Comment and let me know which books you’ve enjoyed re-reading. 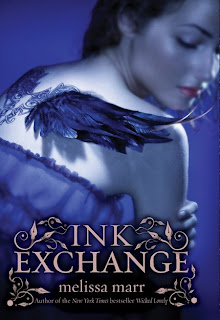 This book sort of picked up from where Marr ended in its predecessor, Wicked Lovely. It is not a direct sequel, but instead, it is thought of as a companion novel. Ink Exchange has three new characters take the role of narrator. First and foremost is The Dark King, Irial, then also Niall and Leslie, the ‘broken’ girl. It is a novel laced with intrigue and romance, darkness and sexiness. (Yes, I really just wrote that!) I re-read this one before re-reading the first in the series as this is one of my favourites in the series.

Characters:
Irial- Dark and sexy, he’s the kind of guy you should never mess with. Although he is cruel and manipulative, he takes care of his own. His love is not the waning sort.
Niall- He carries the scars of a past life quite literally. I think he is the empitemy of the saying’What doesn’t kill you makes you stronger’. Loveable and unique, he is one of my favourites.
Leslie- This girl is stronger than she first appears. She is headstrong, stubborn, and kind- a perfect balance for the faeries’ cruel streak.

Here is the plot if you don’t get it from my short review:

Unbeknownst to mortals, a power struggle is unfolding in a world of shadows and danger. After centuries of stability, the balance among the Faery Court has altered, and Irial, ruler of the Dark Court, is battling to hold his rebellious and newly vulnerable fey together. If he fails, bloodshed and brutality will follow.

Seventeen-year-old Leslie knows nothing of faeries or their intrigues. When she is attracted to an eerily beautiful tattoo of eyes and wings, all she knows is that she has to have it, convinced it is a tangible symbol of changes she desperately craves for her own life.
The tattoo does bring changes—not the kind Leslie has dreamed of, but sinister, compelling changes that are more than symbolic. Those changes will bind Leslie and Irial together, drawing Leslie deeper and deeper into the faery world, unable to resist its allures, and helpless to withstand its perils. . . .
– From Melissa Marr’s website 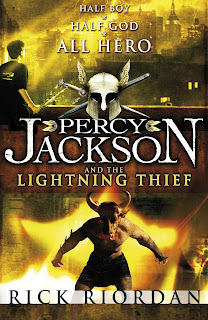 I don’t know many people who haven’t heard of Percy Jackson. It even had its own movie. I will refrain from commenting about it, however. There are only so many ways of describing disappointment.

The book however is brilliant. Riordan weaves myth and modern wonderfully. The novel is never stale, with plenty of humour to relieve the tension. Just don’t forget- the fate of the world is at stake!
Characters:
Percy- Whilst he is a very capable protagonist, he too has weaknesses. His ADHD is both a blessing and a curse, but despite his screwed up life, he never stops fighting for the things he believes in.
Annabeth- She isn’t called ‘Wise Girl’ for no reason. She is one bad-ass character, with the brains to back up her brawn. She is always ready to go down fighting, or think of an ingenious plan to get them all out of sticky situations. But even she has her limits…
Grover- This guy is an awesome best friend, though he has a rather shameful past. He will do anything for the people he cares for the most.
Percy Jackson is about to be kicked out of boarding school… again. And that’s the least of his troubles. Lately, mythological monsters and the gods of Mount Olympus seem to be walking straight out of the pages of Percy’s Greek mythology textbook and into his life. And worse, he’s angered a few of them. Zeus’ master lightning bolt has been stolen, and Percy is the prime suspect.

Now Percy and his friends have just ten days to find and return Zeus’ stolen property and bring peace to a warring Mount Olympus. But to succeed on his quest, Percy will have to do more than catch the true thief: he must come to terms with the father who abandoned him; solve the riddle of the Oracle, which warns him of betrayal by a friend; and unravel a treachery more powerful than the gods themselves
– Synopsis from Goodreads

I had a Meg Cabot phase so please forgive me for the lack of diversity here:

I’m not sure why I had such an addiction with this book. It was well before I discovered the brilliance of Rick Riodarn, and a very long time before the rise of dystopian novels, and sparkly vampires, or even sadistic fey. It was a good novel at the time and I probably still own my copy. I still like the values of this novel, no matter what. Luke taught our girl a few things.

I don’t remember enough to give you my opinion of the character except for that Luke is hot, especially when shirtless.

High school junior Jenny Greenley is so good at keeping secrets that she’s the school newspaper’s anonymous advice columnist. She’s so good at it that, when hotter-than-hot Hollywood star Luke Striker comes to her small town to research a role, Jenny is the one in charge of keeping his identity under wraps. But Luke doesn’t make it easy, and soon everyone—the town, the paparazzi, and the tabloids alike—know his secret…and Jenny is caught right in the middle of all the chaos.

Love You To Death/ Shadowland by Meg Cabot 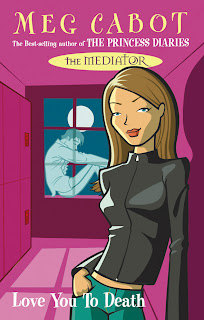 I remember this series all too well, hehehe. Suze can see ghosts, and there is a hot, depressed, 150 year old (or so) dead guy in her new bedroom. Poor her! 😛

This book was very gripping. Suze is a strong character who doesn’t take crap from anyone, least of all the dead. If the whole seeing-the-dead thing isn’t bad enough, she is trying to adjust her life in California as her mother has remarried. This novel is filled with action and suspense, and it will leave you wanting more. Much more.

Characters:
Susannah Simon- Call her by her full name and you die. Having been born in New York, adjusting to a new State is quite something for Suze. Dealing with ghosts even somehow gets trickier. She is awesome, and not much of a whiner. What more can you ask for?

Jesse- This guy is probably my favourite ghost of all time. He is really old school. He is both caring and kind. Their friendship was rather unlikely, given how their first meeting went, but I’m glad that he helped her, even when she insisted she was fine.

Father Dominic- He becomes rather like her mentor in all things ghost related. I think he is rather optimistic about things, but I can understand why he may view things the way he does. I greatly respect him, and I feel bad for him as his student is very stubborn.

There’s a hot guy in Susannah Simon’s bedroom. Too bad he’s a ghost.

Suze is a mediator-a liaison between the living and the dead. In other words, she sees dead people. And they won’t leave her alone until she helps them resolve their unfinished business with the living. But Jesse, the hot ghost haunting her bedroom, doesn’t seem to need her help. Which is a relief, because Suze has just moved to sunny California and plans to start fresh, with trips to the mall instead of the cemetery, and surfing instead of spectral visitations.

But the very first day at her new school, Suze realizes it’s not that easy. There’s a ghost with revenge on her mind.and Suze happens to be in the way.
-Synopsis from Goodreads

When Lightning Strikes by Meg Cabot

When Jess gets hit by lightning she gets a cool new power. But with great power comes great responsibility and yadah yadah yadah! Not to mention the FBI are on her case. How can she keep her power a secret with them around, constantly nagging her?
This is a case of doing the right thing and risking your life, or not doing the right thing and risking your conscious. Jess is a tough girl who can take care of herself. She has anger management issues and she plays the flute. I say this because so do I! I mean, I’ve sorted out my anger issues, but I still play the flute.
This novel is full of suspense and action. It has a strong female character, who I really like. She is the bad ass girl who isn’t afraid of sticking up for her friends despite her lack in size. This was rare for me back in the day before the likes of Annabeth Chase and Katnis Everdeen. And of course, Jess is pining after the guy that she can’t have- bad boy  Rob Wilkinson. Read the series to find out how it ends between them.
Jess Mastriani has never been what you’d call a typical Midwestern teenager—her extracurricular activities, instead of cheerleading or 4-H, include fist-fights with the football team and month-long stints in detention. A part of Jess would like to be the prom queen her mother has always envisioned her being, but another part is secretly counting the days until she’s saved up enough money to buy her own Harley.

Then something happens that guarantees Jess will be one of the in-crowd…at least until her newfound talent ends up getting her dead.

The Immortal Rules by Julie Kagawa