In Cassia’s society, Officials decide who people love.
How many children they have.
Where they work.
When they die.

But, as Cassia finds herself falling in love with another boy,
she is determined to make some choices of her own.

And that’s when her whole world
begins to unravel… 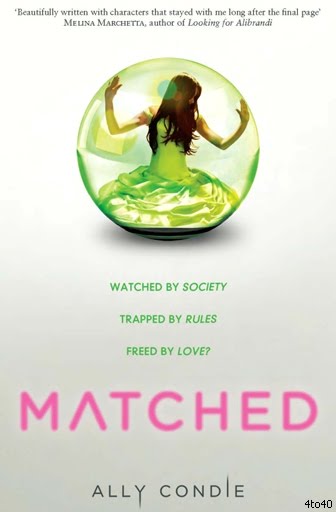 When I heard about the idea of a world in which your free will is basically taken away from you, I knew I had to read the book. So, it’s not quite like how I just said. The character got to make up some choices. For example, apparently Cassie didn’t have to choose to be Matched. Her other choice was to live the rest of her life as a Single. But that meant that she would not be able to have children. Things work differently in the Society. As stated, the Society chooses who you marry, where you work and when you die. This is done to maximise life expectancy and quality. Even the food the character eat is not their choice, and it is scheduled precisely. Fashion is also pretty much no more, as everyone wears ‘plainclothes’. Boring! Overall, the universe Condie has created is wonderful.
The characters are all lead to believe that this is all in their best interest, thus making it a utopian-dystopian novel. But what of the people that are mentioned to live outside of these Society maintained cities? Well, I guess for them, it’s every man for themselves. They live in the fringes, and it is hinted- ok maybe it wasn’t quite that subtle- that there is a war arising. This reminds me a bit of The Hunger Games, which leads me to believe that Cassie probably lives in the Capitol of her universe, albeit not as glamorous.

The blurb at the back of the book doesn’t make it clear who the guys are but the trailer definitely does, and seeing as how it’s an official one, I don’t think this is technically much of a spoiler. Cassie has been Matched with her best friend, Xander, but falls for a boy she cannot have. Ky Markham. So am I team Xander or Ky you wonder? To be honest, I still haven’t made up my mind, even if Cassie has.
They are both very likeable- loveable even. Xander is the safe guy, the one that the Society wants her to be with, so of course Ky is the more interesting one to be with. Just saying. But Ky is mysterious and intriguing. He never shows his true self because he carries a secret.
They both love her of course, and she loves them both in her own way. My biggest problem is that I honestly think that if Ky’s picture hadn’t showed up on her screen for that split second or so, Cassie wouldn’t have fallen for him. Luckily, Condie did address this problem.
Overall, it is quite an interesting Love Triangle. I liked it how Condie developed the romance between Ky and Cassie slowly. They didn’t fall head over heels all of a sudden. She took the time to pace it in order to make it realistic. Cassie wasn’t as infuriating as Twilight’s Bella who took an awfully long time to make up her mind. Having said that, she did have a problem deciding who she really wanted to be with, as expected.

Luckily there actually was a bit more to the novel than he romance alone. There was a wonderful family dynamic in this novel. Cassie’s grandfather was coming to his 80th birthday. Now in the real world, this should simply be a time of celebration. But thanks to The Society, this is the day that everyone dies. It is said that this is done so that people do not age and become a burden of their families. This way, they do not feel unwanted or go through the indignity of being completely reliant on others in order to do simple things. Okay, so maybe that was a minor spoiler but please don’t kill me.
As the novel progresses, Cassie starts to question the Society and whether if all that they do is really in the interest of its citizens. She starts to realise that there could be something more, and that maybe, just maybe she would prefer to follow the words of the poem: do not go gentle.
0

I Love a Good Parody