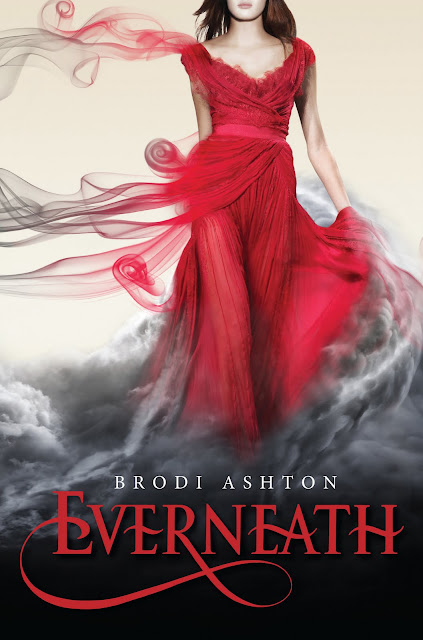 I read this weeks ago but between procrastinating and revising for my AS levels, I haven’t had time to review this. So here it is!

I won’t even lie. I saw this at my local bookstore and just went ‘Wow! Fabulous cover!’ But at the time I had been looking for another book, so I took a note of this one and then googled it. After reading an excerpt, I was hooked. There were so many unanswered questions, left by the air of mystery. What was the Feed? Who was Cole? Enticed, I readied myself for another visit to the bookstore, and I was left spellbound. So here is the summary that I found on Goodreads:

Last spring, Nikki Beckett vanished, sucked into an underworld known as the Everneath, where immortals Feed on the emotions of despairing humans. Now she’s returned- to her old life, her family, her friends- before being banished back to the underworld… this time forever.

She has six months before the Everneath comes to claim her, six months for good-byes she can’t find the words for, six months to find redemption, if it exists.Nikki longs to spend these months reconnecting with her boyfriend, Jack, the one person she loves more than anything. But there’s a problem:

Cole, the smoldering immortal who first enticed her to the Everneath, has followed Nikki to the mortal world. And he’ll do whatever it takes to bring her back- this time as his queen.
As Nikki’s time grows short and her relationships begin slipping from her grasp, she’s forced to make the hardest decision of her life: find a way to cheat fate and remain on the Surface with Jack or return to the Everneath and become Cole’s…
So, my first disappointment was that this dress didn’t actually feature in the novel. Nikki wore the same black dress to two different events, but never the stunning red one that is on the cover. I can forgive Ashton for this, but I have a thing against unrelated book covers. Yes, I’m talking to you Stephanie Meyer. Neither her titles nor her illustrations have anything to do with her novels. Eclipse is the one exception as I believe it to be a metaphor for the love triangle. And they even tried to get the apple to link in during the first movie. But I’m getting off topic.
This book left me gasping and crying. So much for her happy ending. I don’t mean to give anything away, but if you intend to read this, be prepared for some heartache.
I loved the use of mythology in this novel. It’s funny that I read it right after The Kane Chronicles and it somehow managed to link, even though the other other trilogy is based on Egyptian mythology and I was led to believe that Everneath was based on Greek myth.
My favourite character was Jack, without a doubt. Cole was strange, but I liked him in a ‘I love to hate him’ sort of way. He reminded me an awful lot of Paul Slater from Meg Cabot’s Mediator series, as both characters seem to be infatuated with the protagonist, but she isn’t interested. And they are both very creepy.
I RATE THIS A 4/5! You can’t go wrong reading this. Unless you hate romance, then maybe you should try something else.