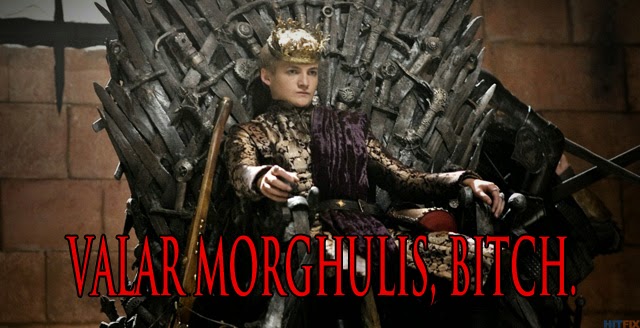 The king is dead! But the queen is alive. So who rules next? I suppose it’ll be his cuter little brother.
Admist the grandeur and splendor of King Joffrey’s wedding, who could guess that an assassination plot would be unfolding? Well, readers of the book series, I suppose. But the Lannisters seem to think they are untouchable since winning the war of the five kings. Joffrey’s dwarf reenactment is more than a little distasteful. After all, one dwarf was shown hitting King Renly’s butt in a lewd manner. Joffrey holds himself as victorious despite the fact that he did pretty much nothing apart from hide.

It’s quite eerie in fact that The Rains of Castamere was played at the wedding. The Lannister’s theme song playing at the king’s wedding should only reinforce their absolute reign but it does nothing but irritate Joffrey, who throws coins at the musicians and basically tells them to piss of. Was I the only one who saw this song as some sort of bad omen?

The bitchiness at King’s Landing is as exciting as ever. We have Jaime antagonising Ser Loras, and Cersei embarrasing Lady Brienne. And was I the only one who found it hilarious, when Prince Oberyn snubbed Tyrion? And can we please just appreciate the sexual tension between Oberyn and Loras?

But it’s the conversation Oberyn and Ellaria have with Tywin and Cersei that drew my attention. The threat Oberyn makes is more than a little worrying:

People everywhere have their differences. In some places, the highborn frown upon those of low birth. In other places, the rape and murder of women and children is considered distasteful. What a fortunate thing for you, former Queen Regent, that your daughter Myrcella has been sent to live in the latter sort of place.

I’m not sure how far he is willing to go on this threat, or whether it’s simply to gain the satisfaction of seeing the Lannisters squirm. Either way, it certainly adds something to the drama at the wedding. I love Oberyn and I hope he continues to strut around like he owns the place for a few more episodes.


But even some the the events that occur prior to the festivities were of interest. Can we please give a minute of silence for the Tyrion x Shae ship? I’m not entirely sure whether this is the last time we will see her because we didn’t actually see her leave, but I find these GIFs very appropriate:

And of course, Stannis is burning more of his own people. This time, it’s his brother in law. I quite liked seeing Melisandre talk with Stannis’ daughter. What piece of wisdom did she give the princess?
“There’s only one hell, princess. The one we live in now.” This may or may not be true.

All I know is that episode 2 of this season has broken the usual format in which the ninth episode is the most dramatic in the series. And I for one am quite glad. Even the form of this very episode was stellar. We had the death of the king sort of mirrored by the brutal murdering of an innocent by Ramsey Snow. And now that the king is dead, perhaps the Bolton bastard will be his successor of most hated character. But despite how twisted he is, I do have just a drop of sympathy for him, considering his relationship with his father. Still, Jon Snow had the same problem and he didn’t turn out so sadistic.

Where do we go from here?