There’s something about the new guy at Crossroads High…

Most sixteen-year-olds have friends. Aden Stone has four human souls living inside him:

One can time travel.
One can raise the dead.
One can possess another human.
One can tell the future.

Everyone thinks he’s crazy, which is why he’s spent his entire life shuffled between mental institutions and juvie. All of that is about to change, however. For months Aden has been having visions of a beautiful girl—a girl who carries centuries-old secrets. A girl who will either save him or destroy him.

Together they’ll enter a dark world of intrigue and danger… but not everyone will come out alive. 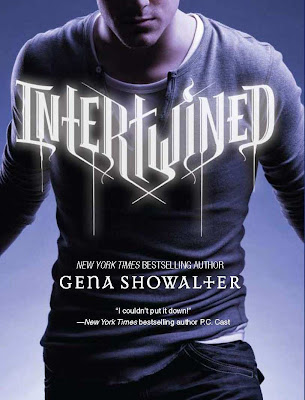 I recall first hearing about this book at the back of The Iron King by Julie Kagawa as an advertisement by Mira INK. The synopsis sounded interesting but I more or less dismissed it, instead determine to Kagawa’s sequel. I never would have guessed that I would have ended up liking this book as much as I did. It was utterly addictive. I finished within 2 days, and that is no easy feat when you’re stuck up to HERE with A level coursework and examination preparation. It’s no wonder my friends think I’m insane.

Anyway, on with the review…

Haden “Aden” Stone has 4 souls in his body + his own. Each of these souls has their own power, which makes him a beacon for trouble. Diagnosed with schizophrenia, he has been sent from one mental instituion to the other, even being adopted from time to time. All he wants is to find a way to free the souls inside him. I really admired the relationship he had with the souls, and found it a little touching that he helped them pick their names. Things would have been far easier if they had remembered who they had been in their previous lives. It isn’t until one of them remembers their past life that Aden can really confirm that they are the spirits of dead people. It might have been a bit more interesting if one of the souls had been antagonistic, but their family banter was great all the same.

Being a YA book, romance was always going to have a part to play. Aden has being having dreams of a mysterious girl. It’s pretty clear that he’ll be having a romanic relationship of sorts with this girl and I’m not surprised when she finally appears. Victoria is a vampire princess. Sorry, minor spoiler there. She is strong, powerful and of course, beautiful. I’ve read a lot of YA books so really I find her a type-cast with not much in her to make her particulalry unique. She has the slight “Oh- I’m- A- Monster” thing that a lot of vampires are represented as going for her. She is often disgusted with herself and doesn’t want Aden to see her for what she is- a blood thirsty parasite. So yeah, she’s essentially the female Edward Cullen. It’s pretty ironic too considering that her name is Victoria, the name of the vampire who wants to kill Bella for revenge. Did I hate Victoria? No. Did I like her? Not overly. I regard her with a cool indifference. It’s funny because I think I kind of liked her before, but my opinion has changes slighlty upon reflection.

The other main character is Mary-Ann. First thing you should know about her? She’s a complete Mary-Sue. She hasn’t got a lot of depth to her. Her life starts off more or less perfect. She’s in the popular crowd, dating the popular guy. She’s even a straight A student, even though she pretty much seems to hate working. She does it so that her dad can be proud of her. At least that’s one insecurity she has. One step to becoming more flawed and understandable. When we first meet her, I’m afraid that she’ll fall in love with Aden, but thankfully the one thing this book does not have is a LOVE TRIANGLE. I think I’d die or at the very least chuck this book back at the library I found it in if it did.

There is even a romance between Mary-Ann a certain wolfman but I think I’ll let you discover that on your own. Team Riley <3 The plot mostly consisted of trying to uncover the secrets surrounding Mary-Ann and Aden’s lives. For some reason, Aden is very powerful and has attracted the attention of lots of different magical creatures. And I mean lots. The vampires were the first, but then there came the witches, faeries, demons and goblins. Even angels and a motley of other creatures were mentioned. Were all these supernatural creatures necessarry? No. Did they add to the story? Not really. I mean, sure they make the whole situation seem more dire, but in Aden’s point of view it was scary enough jut to have caught the attention of vampires. My advice would have been to choose only two or three creatures. Perhaps vampires, werewolves, and the witches. There is of course a way of having multiple creatures in a book series, but you have to make it believabe. Of course the other issue is the fact that Aden is apparantly fated to die in the near future. So how about you pick up this book and read about his fate? Overall, I enjoyed this book and I would recommend it, but at the same time, I did find it slightly lacking in some areas. Aden was a likeable character. He was both brave and vulnerable. Cute (even allegedly hot) but not conceited. And Mary-Ann was Meh. I give it 3 1/2 stars.